By Ken McCarthy in News

In 1963, John F. Kennedy went to Berlin to speak on behalf of freedom in front of an enormous crowd. Not only did the news media cover it then, it remains an iconic moment in modern history.

Last weekend, Robert F. Kennedy Jr, a lifelong environmental attorney, gave a talk to hundreds of thousands of people in Berlin who came out to protest the lock downs, the masks, and the entire “pandemic” medical fraud.

Not only did the so called “news” media not carry his comments, they reported the story as “Kennedy went to Berlin to speak to two or three thousand Nazi right wingers.”

When the news media lies this consistently and this massively, you don’t need a PhD to know something is seriously, seriously wrong.

Kennedy lays out the case.

The pandemic is a fraud and I hope someday the people in my own country will have the intelligence and integrity to stand up for themselves the way the Germans are.

Here’s my sincere plea to people who are standing on dry land, not starving, and have not lost their jobs and homes:

Get the cobwebs out of your head, grow a pair and stand up for the millions of innocent people who are being crushed by this non-stop fraud and stop quietly enabling it.

If you want to read the transcript of his talk, the link is at the bottom of this article.

In between, writing this page and queueing it for posting, this video came across my desk.

I verified it several different ways. It really happened.

Australian police entered the house of a family and handcuffed a pregnant woman in front of her small children for the “crime” of encouraging peaceful protest against the lockdowns with a post on Facebook, “inciting a riot”, which is a criminal and jailable offense.

There’s no shame in being temporarily fooled by government and news media con artists, but there does come a time when you have to ask which side are you on?

But that’s not all.

I just came across this news story from the NY Post. This woman, a nursing student, was arrested twice in front of New York City Hall for peacefully holding this sign. Her name is Linda Bouferguene.

It’s worth making the effort to read her sign. She raised these basic questions in MAY and they still have not been addressed. 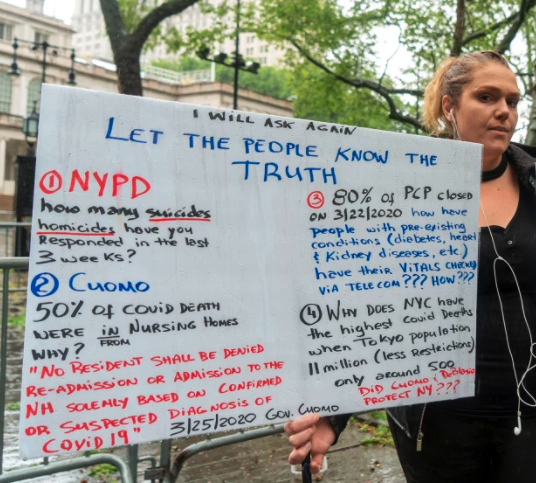 Something is very, very wrong. It has nothing to do with Right vs. Left or Trump vs. Biden.

The normally unbalanced and unreliable people attracted to politics and government are behaving much more perversely than usual.

That’s the issue and it’s way past time for everyone to wake up and stop enabling the “killer virus” story.

You can click here for the transcript of Kennedy’s talk.