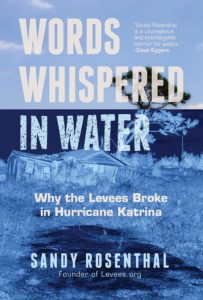 My contribution to the effort to get to the truth about “Katrina” is in Chapters 6 and 7.

If you’re surprised that I’d expend so much effort swimming against the stream, you don’t know me very well.

In 1993 and 1994, I took a strong position not only that the Internet would be commercialized – no one could see how at the time – but that it would change everything.

At the time Bill Gates and Steve Jobs were on the record that the Internet was a fad.

Gates was upset because the Internet threatened to steal media thunder from his Windows 95 launch.

Jobs railed against Internet “hype” because he was ideologically opposed to networking personal computers. He felt so strongly about this that Apple didn’t add networking capabilities to its machines until 1983, seven years after its first product.

Anyway, even in San Francisco, in the early 1990s to claim the Internet had a commercial potential that would express itself in multimedia publishing (text, graphics, audio, and video) was considered crazy talk…

Until November 5, 1994, when I organized and sponsored the conference “Multimedia Publishing on the Internet.”

But the Internet was not the only time I went out on a limb.

Sixteen years ago, I sat on the edge of a bed in a hotel in Montreal watching TV with my jaw hitting the ground as I saw a major American city New Orleans nearly wiped from the map – supposedly by a hurricane.

After I recovered from the shock, I started to look into what happened.

Mississippi was hit full on with a Category 5 force hurricane, but by the time the storm reached New Orleans, it was Category 3, barely enough to pull shingles off roofs.

So why was the city devastated?

It made no sense.

I remember the original news broadcasts after the storm passed when newscasters said ”the city dodged a bullet.”

Then – after the storm had based – Canal Street started filling up with water.

Every news media outlet and every BS politician – and all the people dopey enough to ever believe these people – started parroting “Katrina did it… it was an Act of God…Mother Nature.”

About a year and a half after this, I finally found someone who was asking the same questions I was who was also willing to do something about it and I’ve spent the next 14 years helping her get to the truth and get the truth to the public.

Fast forward to the present: It’s now accepted fact – by the New York Times, the BBC, CNN, and all the other idiots who got it so wrong – that the catastrophic flooding of New Orleans was caused by a massive engineering failure on the part of the US Army Corps of Engineers…

…A fact they spent tens of millions of dollars in taxpayer money trying to conceal.

The story of how the U.S. Corps of Engineers colluded with the news media and local and national politicians to cover up their responsibility – and how the truth was finally brought to light – appears inn the new book “Words Whispered in the Water”.

The author Sandy Rosenthal interviews me about how we went out on a limb and won.

Lots of good lessons here on what to do when you’re faced with “impossible” circumstances.